In more than a year after the virus outbreak, various scientific research units and vaccine companies have worked to successfully develop a variety of COVID-19 vaccines. The vaccines can be classified by different technological platforms into whole virus vaccines, subunit vaccines, viral vector vaccines and gene vaccines (Fig. 1). Currently, 7 vaccines have obtained the WHO's emergency use authorization to be used in massive vaccination on a global scale, and over 300 vaccines are under development in pre-clinical or clinical trial stage. 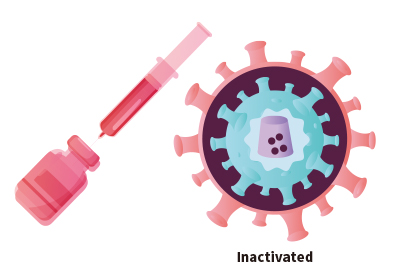 Mechanism:Whole virus vaccines include inactivated vaccines and live-attenuated vaccines. An inactivated vaccine is a vaccine consisting of virus particles that have been grown in culture and then killed to destroy disease-producing capacity. In contrast, live-attenuated vaccines use pathogens that are still alive but are weakened, thus preventing infection from the vaccines. The immunogenic content of whole virus vaccines induces an immune response dominated by humoral immunity or antibody-mediated immunity that neutralizes and removes the pathogen.

Manufacture:Pathogens for whole virus vaccines are grown under controlled conditions and are killed using chemical or physical methods such as formaldehyde or heat, then purified and added adjuvants to make vaccine preparations. This measure increased the safety of the killed vaccines while maintaining their antigenicity due to the preserved structure of the antigens.

Features:Whole virus vaccines, especially inactivated vaccines, have a high safety profile and are easy to produce and transport on a large scale. It is a mature technology that has been used for hundreds of years. Therefore, it is usually a prioritized route of vaccine development in immediate response to the outbreak of a pandemic. The drawbacks of inactivated vaccines include the relatively low level of induced immunity and the large dosage required for each immunization. To generate enough protection, multiple inoculations may be required.

BBIBP-CorV and CoronaVac have been officially approved for use by the WHO, and large-scale vaccination has been carried out in Asia, Africa, South America, and Europe. Russia, India, Kazakhstan, and Iran have also successfully developed their own inactivated vaccines for COVID-19 that are approved by at least one governmental health sector for use in the general population. There are also more than 20 inactivated vaccines under development at clinical trial stage (Data retrieved from © 2021 McGill COVID19 Vaccine Tracker Team). 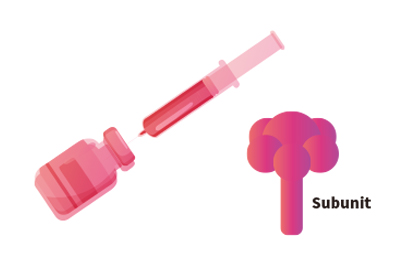 Mechanism:Subunit vaccines contain only the selected antigenic parts such as proteins, une response, instead of the whole pathogen in whole virus vaccines. Virus-like particle (VLP) vaccines are also one type of subunit vaccines that use VLPs, or proteins assembled into the natural shape of the virus' outer shell that mimic real virus particles.

Manufacture: Subunit vaccines are produced by recombinantly expressing and collecting the viral antigens in vitro. An expression vector containing the target antigen gene is transfected into engineered cell lines to express the target protein in large quantity, then the protein is purified, and adjuvants are added to make vaccines preparations.

Features:Because the vaccine doesn't contain "live" components of the pathogen, there is no risk of introducing the disease, and it is safer and more stable than the vaccine with whole pathogens. Furthermore, subunit vaccines have well-established technology and are suitable for immunocompromised individuals. Disadvantages include being relatively complex to manufacture compared to some vaccines (such as mRNA vaccines), possibly requiring adjuvants and booster shots, and requiring time to examine which antigenic combinations may work best.

A large number of COVID-19 vaccines have taken the recombinant subunit route. The overall protection by subunit vaccines in clinical trials is higher than that of inactivated vaccines. At present, more than 50 protein subunit vaccines are under development. 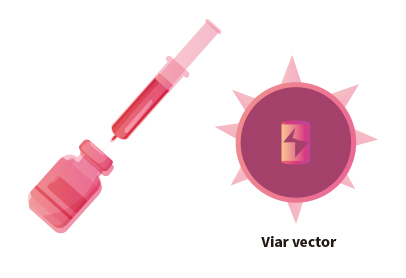 Mechanism:A viral vector vaccine is a vaccine that uses a modified version of one virus as a vector to deliver genetic material coding for the targeted antigen of another infectious agent            into the recipient's host cells. Viral vector vaccines do not cause infection with either the virus used as the vector, or the source of the antigen. The genetic material it delivered enables antigen expression within cells and is capable of inducing a robust cytotoxic T cell response, unlike subunit vaccines which only confer humoral immunity.

Manufacture:Viral vector vaccines production requires building a viral vector containing the target antigen gene. Most viral vectors are designed to be incapable of replication because the necessary genes are removed.

Features:The most often used viral vector is the adenovirus vector, which has advantages of high transduction efficiency, transgene expression, broad viral tropism, and can infect both dividing and non-dividing cells. A disadvantage is that many people have pre-existing immunity to adenoviruses due to previous exposure. Human adenovirus serotype 5 is often used because it can be easily produced in high titers. 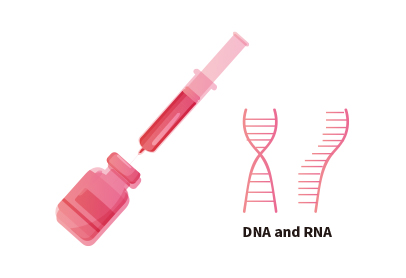 Mechanism:Gene vaccines introduce a specific antigen-coding DNA or mRNA sequence into the cells of an organism to induce an immune response. Through the expression system of the host cells, antigen can be synthesized from the genetic material and a strong immune of the host to the antigen protein can be induced, so as to prevent and treat diseases.

Manufacture:Production of gene vaccines requires molecular sequence design, in vitro transcription, purification of the genetic molecules, and mixing with delivery molecules. In mRNA vaccines, the mRNA is delivered by a co-formulation of the RNA encapsulated in lipid nanoparticles that protect the RNA strands and help their absorption into cells.

Features:The advantages of gene vaccines over traditional vaccines are ease of design, fast speed and low cost of production. Moreover, gene vaccine can induce both cellular and humoral immunity. Some mRNA vaccines have the disadvantage of requiring ultracold storage before distribution, while others are making improvements to lift the restriction.

BNT162b2 (Pfizer/BioNTech): Protection against severe diseases iulation. is 97%; protection is about 91% after six months of inoculation

ZyCoV-D (Cadila Healthcare, India): The first DNA vaccine approved for humans was given emergency approval by Indian authorities in August 2021

The WHO has approved two mRNA vaccines above and launched large-scale vaccination around the world. Both of them have been confirmed to have high effectiveness.

At present, more than 30 kinds of COVID-19 mRNA vaccines are in pre-clinical or clinical trials in the world. In China, ARCoV, the mRNA vaccine jointly developed by Walvax Biotechnology, Suzhou Abogen Biosciences, and the PLA Academy of Military Science, is currently at the phase III clinical trial stage.

A Summary of Different COVID-19 Vaccines
Prev
Next