Natural killer (NK) cells are important effector cells of the innate immune system, which can quickly recognize and eliminate infection, stress, and malignant cells. Unlike T cells and B cells expressing antigen-recognition receptors such as TCR and BCR, NK cells can destroy target cells without prior antigen sensitization (e.g., virus-infected cells, certain tumor cells, and damaged cells). In addition, NK cells have no MHC restriction and fast response speed, which can play a role in the early stage of the immune response. This is also an important reason why NK cells are called natural killer cells. 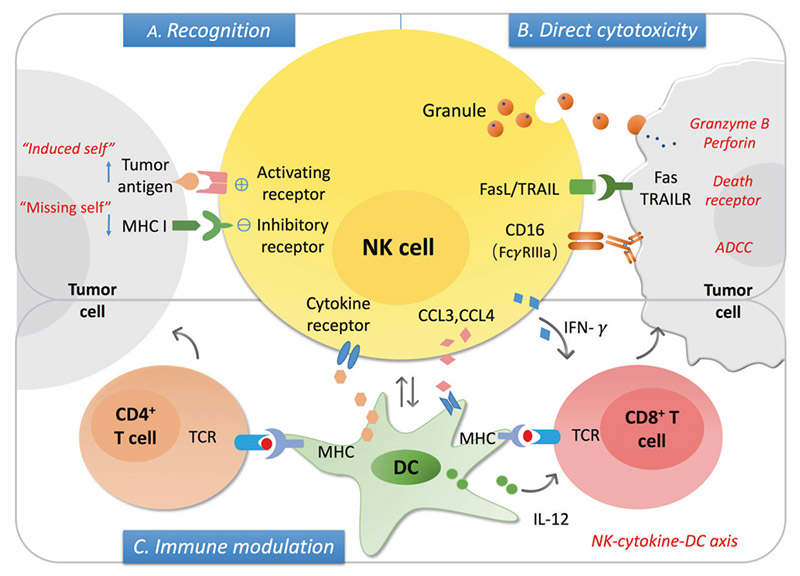 The mechanism of NK cells in cancer

NK cells can be used as innate cytotoxic effectors to regulate innate and adaptive immunity. The levels of stress-induced ligand (" induced self ") and MHC I decreased expression (" miss self ") can be recognized by activating and inhibiting receptors on NK cells respectively, and the balance between the two determines the activation state of NK cells. After activation, NK cells can induce the lysis of the target cells via secreting granules with granzyme B and perforin, the death receptor/ligand interaction, and antibody-dependent cell cytotoxicity (ADCC). On the other hand, activation of NK cells secretes a series of cytokines and chemokines that promote DC maturation and recruitment, further regulating T cell responses, including cytotoxic CD8+T cells and Th cell activation.

ADCC is a process involved in NK cell activation, release of cytokines and cytolytic particles, and induction of apoptosis of target cells, mainly mediated by low-affinity Fc receptor, FcγRIIIA/CD16a. CD16 is a receptor that activates the NK cell effect, inducing tyrosine-based activation motif (ITAM) phosphorylation of the immune receptor through signal transduction, triggering the release of dissolved particles and cytokines such as IFN-γ and TNF-α. In addition, when NK cells interact with target cells, CD16 in NK cells is down-regulated, which results from the shedding of CD16 exodomains during NK cell activation. CD16 shedding of NK cells is mediated by transmembrane glycoprotein, collapse, and metalloproteinase 17 or ADAM17. All of these demonstrate the central importance of CD16 in triggering NK cell-mediated ADCC. 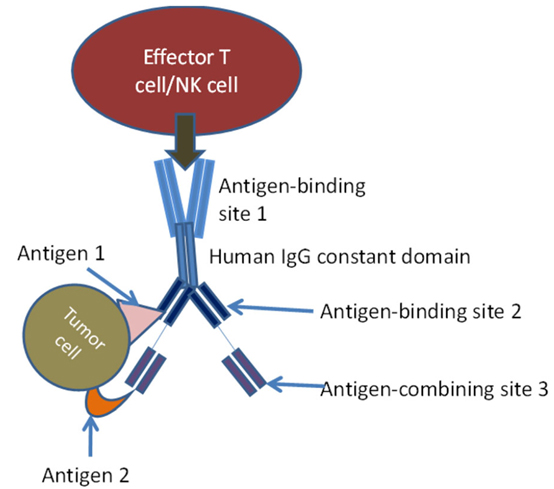 Multiple BiKEs and TriKEs are currently in preclinical studies to directly activate NK cells, promote the formation of immune synapses between NK cells and tumor cells, and have cytotoxic activity against various tumor cell antigens through CD16.

Progress of BiKEs and TriKEs in drug development

Binding of AFM13 to CD30+ malignancies enhance NK cell activation, cytotoxicity and secretion of cytokines and chemokines, and AFM13 has shown good efficacy data in both monotherapy and combination therapy with anti-PD-1 for CD30+ malignancies.

AFM24, also from Affimed, is a new a novel bispecifc, IgG1-scFv fusion antibody targeting CD16a on innate immune cells, and EGFR on tumor cells using the redirected optimized cell killing (ROCK®) antibody platform. Studies have shown that AFM24 binds CD16a on NK cells and macrophages in the low nanomolar range, and binds to a variety of EGFR-expressing tumor cells. AFM24 is highly effective in vitro through NK cell-mediated cytotoxicity of antibody-dependent cells and macrophage-mediated ADCP. More importantly, AFM24 was effective against multiple EGFR-expressing tumor cells, targeting a variety of solid tumors, such as colorectal cancer or lung cancer, regardless of EGFR expression level and KRAS/ BRAF mutation. In vivo data showed that cynomolgus tolerated AFM24 at the highest dose (75 mg/kg) once a week for 28 days, and no dermal or other toxicity was observed. A temporary increase in IL-6 detected at all doses 2-4 h later returned to baseline levels after 24 h. These results demonstrate the potential of AFM24 to effectively target tumors expressing different levels of EGFR, regardless of their mutation, and highlight the promise of BiKEs as an alternative cancer therapy. 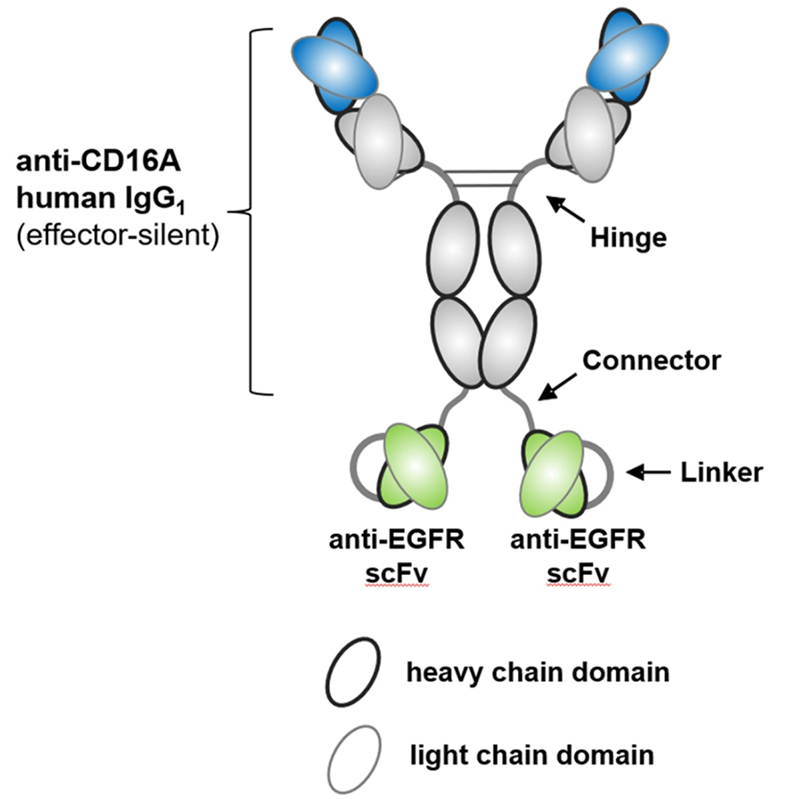 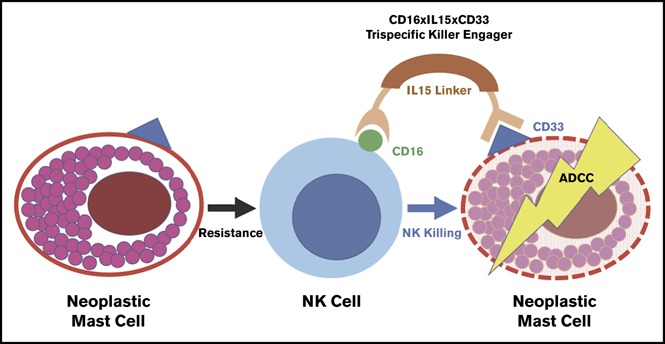 TriKE 61533 combines anti-CD16 scFv with anti-CD33 scFv, IL-15 is inserted as a linker between them to amplify NK cells and enhance their mediated killing of CD33- targeted myeloid cell. Described as a first-generation TriKE, triKE 161533 (SCFV16-M15-33) contains a mutant IL-15 with an N72D substitution (abbreviated m15), and a phase I/II clinical trial is underway for the treatment of refractory AML, high-risk MDS, and systemic mastocytosis (NCT03214666).

Further studies have shown that the effect of substituting a “humanized” anti-CD16 single domain, camelid antibody to replace the antiCD16 scFv, which enabled the presentation of wild-type (wt) IL15 without the use of m15. The resulting molecule, cam16-wt15–33 TriKE, displays stronger IL15 signaling capabilities, better NK cell activation, and increased NK cell–mediated tumor control both in vitro and invivo.

The TriKE platform is unique among NK engagers because it incorporates cytokine signaling, tumor-specific targeting, and activation of a single intramolecular ADCC. In summary, TriKEs not only drive specific tumor-killing, but also induce NK cell proliferation and survival via IL-15 fragments.

Although most BiKEs and TriKEs are currently in the preclinical stage, their ability to enhance NK cell-mediated cytotoxicity against a target holds great promise in treating cancer patients. Further investigation is needed to evaluate the safety and efficacy of BiKE and TriKE before clinical use.

CD16 (FcγRIII) is a low-affinity receptor for the IgG Fc domain and Human CD16 has two isoforms, CD16a and CD16b, their immunoglobulin binding regions share 96% of the same sequence. CD16a is an activating receptor mainly expressed on NK cells and macrophages. CD16b is expressed mainly on granulocytes and is not involved in tumor cell killing. At present, most antibodies targeting CD16 cannot distinguish between CD16a and CD16b. Considering CD16b cannot cause a killing effect on tumor cells and may cause side effects. Therefore, specific targeting of CD16a is particularly important, which is also one of the core technologies of Affimed. 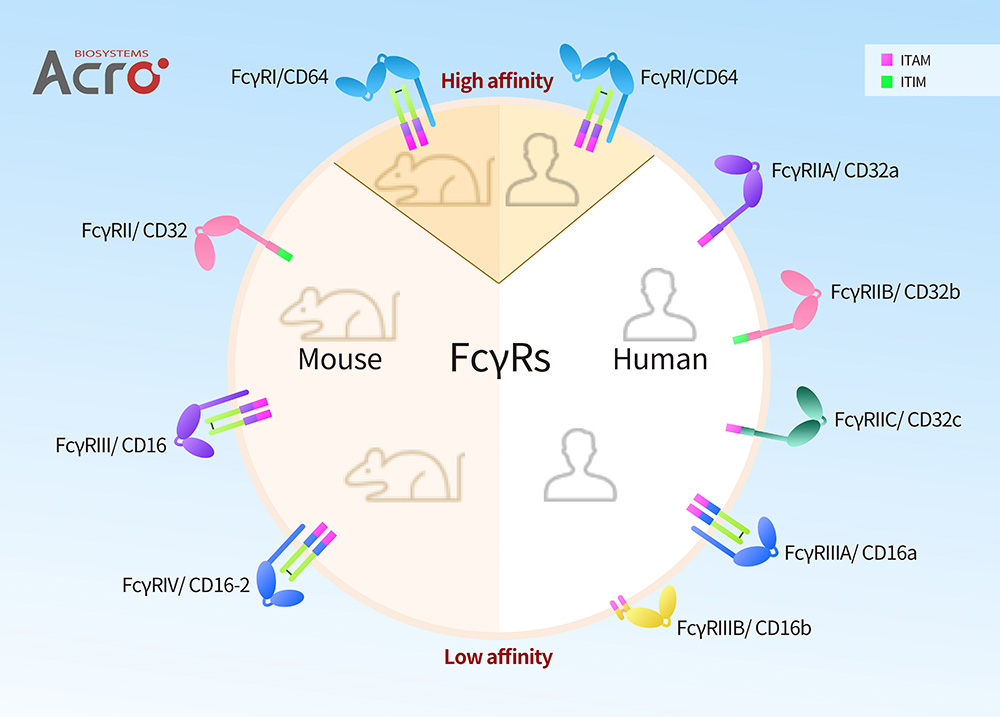 FcγRs in Human and Mouse

Multiple species：Human FcγRIIIA/CD16a and FcγRIIIB/CD16b，Mouse, Cynomolgus, Rhesus macaque FcγRIII/CD16，Mouse FcγRIV/CD16-2 are available and can be used to detect the affinity between antibody candidates and CD16 molecule.

Biotinylated CD16 proteins labeled with AvitagTM offered: the labeling efficiency is high, and the labeling site is specific and clear, which is suitable for ELISA/SPR/BLI detection based on binding to streptavidin in the process of drug development and optimization process 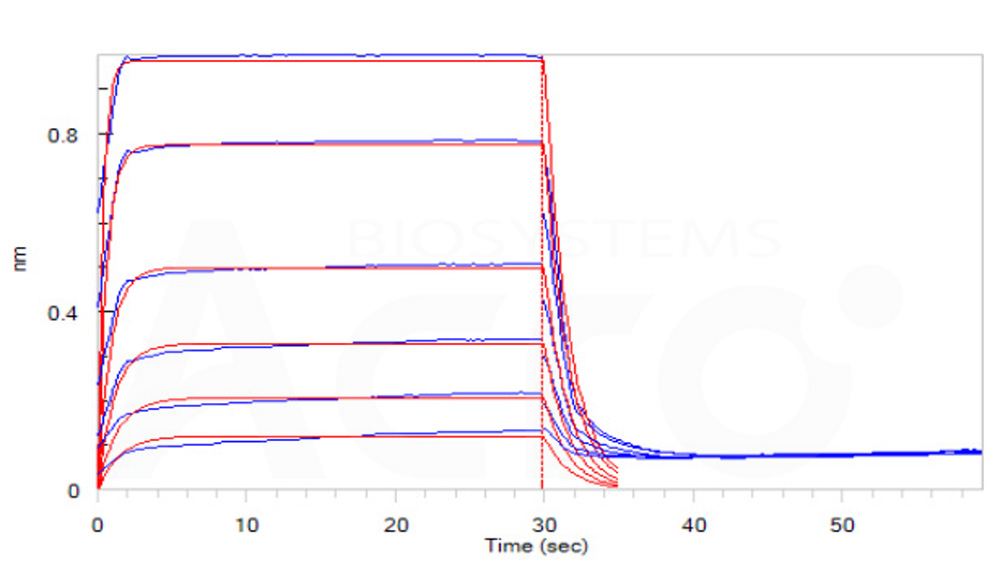 Loaded Biotinylated Human CD16b (NA1), His, Avitag (Cat. No. CDB-H82E4) on SA Biosensor, can bind Rituximab with an affinity constant of 7.7 μM as determined in BLI assay (ForteBio Octet Red96e)